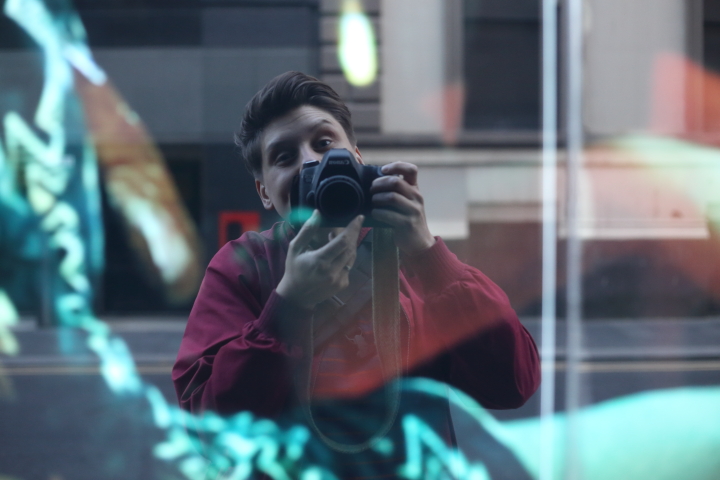 Asten is an artist and filmmaker whose work examines ideas of identity, otherness and belonging. They use a variety of mediums including illustration, painting, photography and filmmaking to research, archive and historicise fringe communities and resist their erasure and exclusion. Asten uses unconventional gallery space to encourage accessibility and approachability whilst amplifying visibility and community cohesion. Many exhibitions are interactive, where both artist and audience become performer and subject. They have worked with the BBC, The Wellcome Collection, and the GOMA – their work has been shown worldwide.

Most recently, Asten has been looking at the use of artistic practice as a tool for speculative futures with a particular focus on sustainable living and community-building.

In 2013 Asten was commissioned to produce ‘The Queer Window Project’. Here, Asten placed a call asking for members of the LGBT community to come forward and be photographed and drawn. The result was thirty photographs, and fifteen large-scale illustrations. This work was then exhibited in a range of public venues around the city with the aim to enhance the accessibility of the portraits whilst also increasing the visibility of the Queer Community.

Asten continues to produce work with an emphasis on outreach and community; during the Glasgow Commonwealth Games Asten was an artist in residence at Pride House Glasgow. Along with Garry McLaughlin, Asten hosted the new project ‘GAMEFACE’, where members of the public were invited to have their pictures taken and portraits painted on the walls of Pride House throughout the duration of the games (23rd July – 3rd August 2014).

Asten worked in camera on a number of productions including commercials, music videos, feature films plus a number of BBC and ITV commissioned dramas. During which time Asten also gained experience of Cinematography working as DoP on small independent productions and short films. In 2010 they won a funding bid from Diversity Films and made their short film ‘James Dean’, about a young trans boy and their family. This short film toured at over a hundred festivals worldwide, winning a number of awards allowing Asten to fund their next short ‘Citizen M’. ‘James Dean’ was nominated for the 2011 Iris Prize by London Lesbian and Gay Film Festival who deemed it “one of a number of outstanding short films screened this year…Watch out for these new talents, LLGFF predicts they are destined for big things”. Asten is also the co-founder of magazine and club night “Lock Up Your Daughters” which encourages and showcases queer artists, musicians, photographers and filmmakers.

Asten is also a proud committee member for the Scottish Queer International Film Festival (SQIFF), the first of which was 24th – 27th September 2015. See the SQIFF trailer here.

Asten is part of Widening The Lens, a talent development scheme of diverse filmmakers run by Encounters Short Film and Animation Festival that will run from March – May 2017.

Asten was awarded a British Council Venice Biennale fellowship, through A Space Arts, at the 58th International Art Exhibition, where Cathy Wilkes will be representing Britain. The opportunity awards you a grant to spend a month in Venice where they will share their time between invigilating the British Pavilion exhibition and conducting independent research, which is guided by the focus of the biennale and the exhibition. Asten will being going in October 2019.